In the youngest years of my children’s lives I lived in a world of possibility, and one terrifying possibility was that I might screw it all up. This worry, and the guilt that went with it each time I made a mistake, was crushing in its weight. I wanted to parent perfectly, and I could become nearly paralyzed at times trying to make decisions.

I recently got an email from a mom who described parenting as far more challenging than she thought it would be. She worries about ruining her kids, about the times she feels like a bad mother, and the way she feels frozen by the fear that she might do wrong. Recent suggestions from her son’s school sent her into a shame spiral and all she could see were the ways she was falling short of her expectations of herself as a mother. My heart went out to her because I recognize that grinding fear, and the way it takes over your days.

It’s taken me years to shake off perfectionism and fear, and honestly I still have nights when I wake at 2am, flooded with worry that I’ve made wrong decisions. I just have more tools now to deal with fear than I did when my kids were littler. I’ve gained more trust in myself and I’ve seen that there is more than one way to be a good mother.

I started to write her back and realized what I was saying might need to be read by someone else too. Ultimately I came up with this poem. Here’s to all the mothers in my life.

Good Mothers Get Lost Too

A good mother
Is late making dinner, forgets to buy milk for the cereal in the morning
And cries at things that she’s sure other people think are silly.
She says things she never thought she’d say
And she has children who say things she wishes they didn’t.

She has bad days and bad moments and bad weeks.
She gets lost.

She might get so lost
That all she can see is the bad and the fear and the doubt and whirling thoughts.

And that’s when
love guides her back.

In the darkness she reaches
With fumbling fingers
And finds that string of love.
Holding tight to this guiding thread, she makes her way back.

She forgives herself
She tries again
She grows.

She is such a good mother.

You
are such
a good mother.

Overcoming perfectionism and trusting yourself is a skill, and you may find you have a very tough inner voice to overcome. I have a collection of phrases for taming that inner critic that I’ll say to myself in times when the “Should Mama” gets too loud to hear my own thoughts and if you struggle with perfectionism, you may also like this article: Here’s what Kids Want Most. We Can Foster Connection More Simply – Here’s How 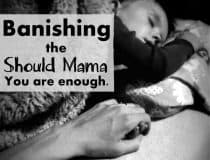 You Know What Will Ruin My Kids?