When I first had kids, I had no idea of the huge weight of guilt I was about to take on.

For one thing, I didn’t realize I had a temper until I the first time I found myself yelling my head off at my nine month old baby who was crying in the back seat – where had that momster come from!? I had so few resources for dealing with the normal frustrations that come with parenting. I felt so much guilt as I struggled to reign in my temper.

Secondly, I had almost zero concept of self care. I thought that to be a mom meant I simply met every need of my children…and I stopped taking care of my own needs in the process. I was tired and resentful much of the time because of this. And, of course I felt guilty for feeling resentment. 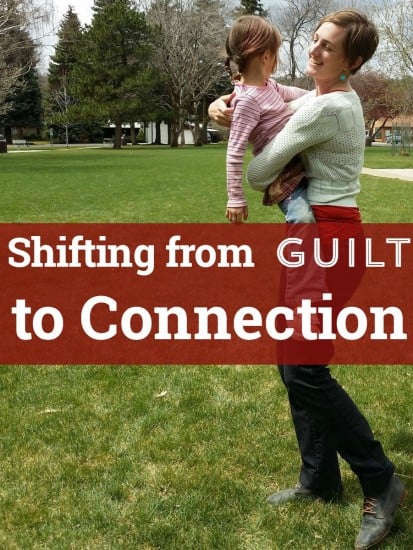 To top off this combination of guilt I had a list of ‘shoulds’ that would bore you it was so long. Being connected fell into these ‘shoulds’. I was pretty sure I was doing it wrong, messing up my long term relationship with my kids. I thought that being connected would be natural and easy, and yet it didn’t feel that way to me. And the kicker was, I thought “everyone else” was living these storybook lives with picture perfect moments of connection.

Since I spent my time looking at other people, comparing and noticing what I was missing, I frequently didn’t see all of the beautifully imperfect moments of connection I DID have. I discounted the connection I was building as it didn’t seem grand enough But thankfully, as I continued to focus on having a connected family, I started to find a different way to look at my family life, and I found the keys to releasing that guilt.

Thing mostly got better because I was so tired.

As my family life got busier and busier it was exhausting to try and live up to all these made up shoulds. I just didn’t have the energy anymore, and ultimately that was a good thing. It became clear to me that if I wanted a feeling of connection with my kids, it had to become part of our days, not something grand and out of the ordinary.

I started giving myself more credit for the small habits we already had. I allowed myself to feel the joy of moments like having our own goofy rituals for changing the sheets (you have to foomf the sheets!) or enjoying our family’s unique take on birthday breakfasts. I let go a little more of the bad moments in our days and told myself, “I don’t have let a few minutes of chaos ruin the whole day.” And I started looking for other little ways I could shift our normal days towards connection.

Connection is a habit, not an event

The most important shift I made was beginning to think of connection as a habit instead of an event.

As I began choosing small things to add to our days I realized I was changing my habits. I was building a habit of connection instead of a habit of guilt. My shift in perspective took me from thinking that having a connected family meant picture perfect moments planned-just-right, to laughing a little more, and knowing that my connected family was just right in this moment… and sometimes a bit chaotic in the next. I started to have more confidence in myself as I saw that our unique family has it’s own ways to build the bonds of connection, and we don’t need to look like everyone else.

I started to see that small moments of connection sprinkled through our days lead to an overall feeling of having strong bonds.

Finally the burden of guilt I’d been carrying began to ease.

If you’re living with a lot of guilt right now, or perhaps feeling like you’re in a relationship rut with your kids that you want out of, I hope you’ll give our Bounceback Texts. These daily reminders give you simple ways to connect, shift perspective and reboot that loving relationship. 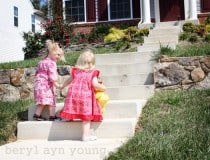 How to Get Photos of Family Events Without Missing The Party How Using a Sharing Journal Helped Me Connect with My Kids Good Mothers Get Lost Too