People don’t talk about having an angry child (I mean a child who is very angry, very often.) At least I don’t see it too often. In this piece, which I originally published in 2012, I’m sharing my experience as best I can, because it has been one of the most isolating experiences in parenting for me. I hope to extend a hand to other parents who are struggling. This is the primary motivation behind the Real Peace community I co-created as well. I hope this story helps if you’re currently struggling with anger in your own family. 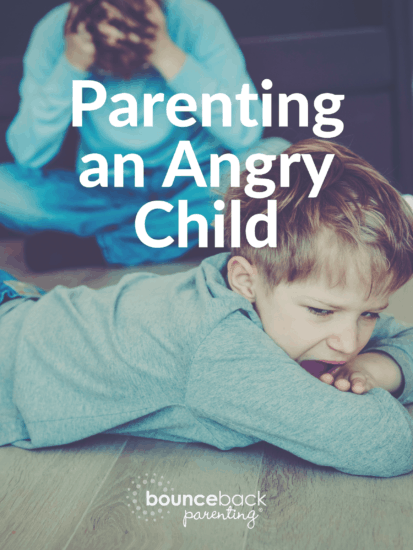 I find it pretty difficult to talk about having an angry child. I want to reach out to other parents and say, “You’re not alone, I know what it’s like. I know it’s hard!” But sometimes, on the blog especially, I just don’t talk about it because it always feels like you need to preface the discussion with, “I love my child, of course.” What a silly statement– OF COURSE I love my child.

Also, what I write here is public for….who knows how long? I assume what I write about my children could be pulled up years and years from now. I have no desire to write anything that will leave my kids feeling embarrassed or ashamed.

But I’m giving a try at writing this because, really, why should our relationships with our children ONLY be allowed to be positive? It doesn’t serve any of us parents to sit alone wondering if we’re doing something wrong. It doesn’t serve our children if we are unable to reach out and find the tools we need to help them handle their big emotions.

My middle son gets ANGRY. In babyhood it was screaming for hours. In toddlerhood it was the screaming and then banging his head on the floor until he gave himself a bloody nose. We’ve moved away from the head banging (thankfully!) But screaming is still loudly a part of our lives. I’ve dealt with my five year old having night terrors for years during which he is simultaneously calling for me and kicking me away if I try to comfort him.

I have been That Person at the grocery store. I have had someone who seemed to lack any empathy tell me “You should knock that F*cker out!” as we barely manage to get out the grocery store doors. Ouch. My son gets angry.

We have been through Early Intervention for sensory issues. He has been diagnosed with migraines and we’ve currently got more diet restrictions more than I’ve got fingers on one hand. All of this helps to a point, but that anger is still there. It is his “fall back” response to being out of sorts.

It’s scary to have an angry child.

Sometimes eating right, doing regular sensory activities and giving positive attention works. We get in a groove and I feel great seeing this shining, wonderful person who is my son, and I think “OK! Now we’ve got it all figured out! Yes!”

But then we fall into a downswing again. (This is where we’ve been lately.) We go into a downward spiral. He wants more attention. I want a break. He becomes a black hole of energy in our family because he is loud and demanding and we are frazzled and unable to meet his needs. I begin to feel hopeless, worried. “What if I can’t DO this?!” I worry that my flaring temper, my inability to ever REALLY figure out this enigma of a child will injure him. I worry that if I don’t do this right, when he’s an adult his already raw emotions will go unchecked and work against him. My worries are darker than that, but writing them down feels like it would only be giving credence to these phantoms.

We are not missing pieces.

The other night I sat on his bed while he cried (I had enough rest and was feeling patient, thankfully) and I realized something that helped me make a mental shift. I realized that THIS is our relationship. He will not be my easy child. He just won’t. I will not wake up one day knowing all the answers. There will be no magic pill that says, “Here, now you are both ready to be with each other and it will be so easy.” And, you know, I finally felt a little bit of peace about that.

I think I needed to grieve and let go of how I hoped it would be.

For his whole life I have been looking for that missing puzzle piece that would solve it all. I have tried so hard, but have been barely adequate at truly accepting my son as he is. That anger is so loud and so difficult that sometimes it’s the only part I have seen.

But that night as he cried and I tried to comfort him, something clicked. I realized that just as I am a growing and flawed human being, so is my son, and he is NO LESS whole for it. He is not missing a part of the puzzle for being so angry, nor am I, for being a mom who is LEARNING how to deal with anger. This is the whole of who we are now and it holds the wonderful potential for who we can become. We are beautiful and varied human beings with a contrast of dark and light. My son may scream and rage in the darkness; he may be so angry that a grocery-store-stranger feels the need to cuss at us, but he has a light that would TAKE YOUR BREATH AWAY if you could see it.

It is Monsoon season here. The days can go from warm and sunny to storming and grey and back again in a matter of hours. The storms are intense – flashing lightning and a cracking thunder that makes you jump. But then – then the rainbow appears. Then the grass grows where once it was dry and brown. It feels like the entire desert sighs with satisfaction and renewal. The desert is not broken; it’s is not missing something. The desert’s harsh swings in temperature can be unsettling, but they are also what gives this place its stark and contrasting beauty.

My son gets angry. He pushes me to learn more about myself, about parenting, about how I respond to anger. He gives me the courage to change and start over when things don’t work. He helps me be a better person because, of course; I LOVE my son.

This is our story that we are living together. No missing pieces, just a chance to grow after the rain.

So this is why I write about parenting, and it’s something I struggle with. I by no means have it worked out, but I keep learning (even on days when I really Rather Not). I just want you to know, if you have an angry or intense child…you’re not alone, I know it’s hard and I’m sending you a hug.