I have a friend who has worked for years in preschools and early childhood centers. She jokes that toddlerhood is the “Load and Tote” phase of childhood. Just give your toddler something to carry things in and something to carry, and they’re good to go.

Load-up! Tote! Dump-out! Repeat! Have group of toddlers? Maybe they can do this in a circuit. I’m only half joking on that one… 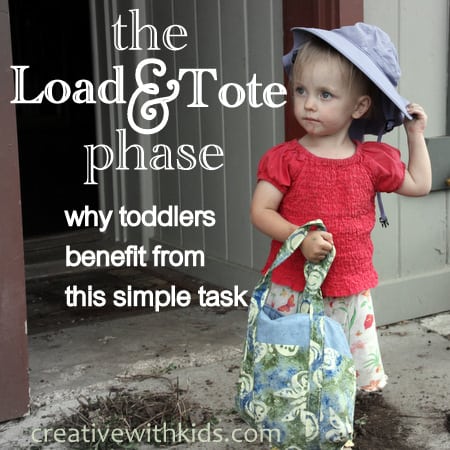 In my post about 10 Fun Chores for Toddlers, I mentioned carrying things, here’s why:

Toting around a basket of blocks is not only entertaining for your tot, it is actually helping them gain body awareness. This kind of “heavy work” sends messages through the nervous system that help the brain learn where the body is in space.

Carrying, dragging or pushing around a heavy load can be calming for your toddler because their sensory system is craving this kind of input over and over to help them understand how to navigate in the world. This kind of activity sends the message, “Here you are. Here is where you end and the world begins.”

Also, since the fact that objects can be out of view and not be totally GONE is still a relatively new concept for them, stashing and then dumping out items is a fascinating exercise in cause and effect. 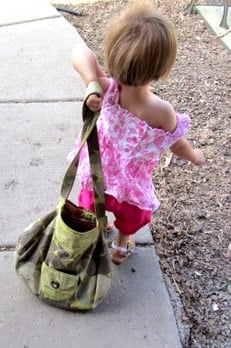 The benefit for you as the parent here? You get to watch and admire the total cuteness as your toddler works at something that is both entertaining and good for their development. One of secrets to playing with toddlers is knowing what toddlers like to do. And toddlers definitely like to carry things! Best Mittens and Gloves for Toddlers – top picks for each