I have a technique that has been really helping with dealing with anger in my family.  It sounded almost too simple when I read it, but often it’s the really simple shifts, the ones that we think could hardly work, that help us most.

This idea for dealing with anger comes from a recent comment on the Parenting an Angry Child post I wrote some times ago. 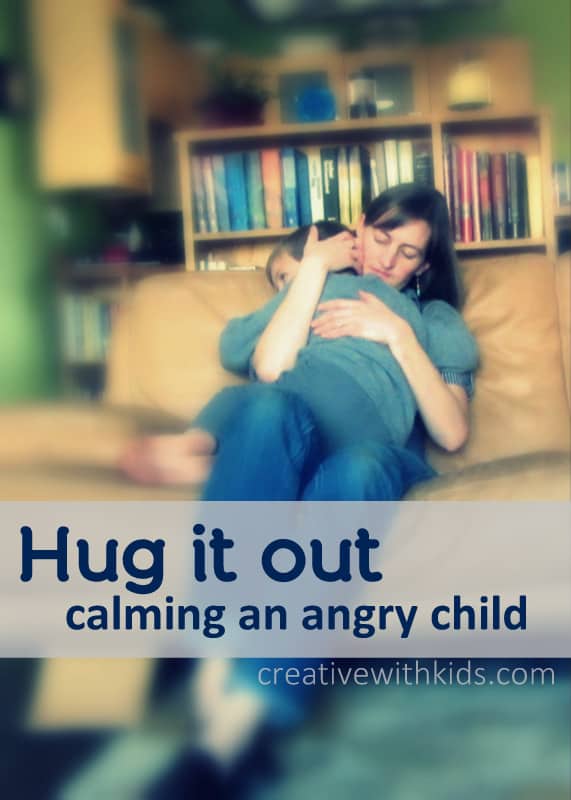 I read it and at first I thought, oh he’s too old for that now, but it resonated with me so much – it makes such sense given my son’s sensitive nature. He may be frequently angry, but he seems to feel everything very intensely, so he’s terribly sensitive to my aggravation and frustration over his anger.

Hug it Out With Your Angry Child

Here’s what Mary wrote about her angry child:

We haven’t figured out how to always prevent the crisis, but only how to stop it: by not getting into a discussion/lecture/time-out or whatever. We see each tantrum as a cry for love and affection, get down on our knees and open our arms. Sometimes he rushes straight into our hug and sobs in remorse for a few secs, then completely relaxes. Sometimes he claims he doesn’t want to come anywhere near me, but I remain in my open arms position and say “I’ll be waiting for you to come, come when you’re ready” – a minute later he’s here. Some other times he will scream that he will never come close to me, I leave and go about my business after I state that “as soon as you feel ready, come give me a good hug”. Sooner or later, he always comes.

When relaxed, we can talk about the problem.

My arms are open.

Adopting this “My arms are open.” position has been opening my heart, and allowing me to shift into listening mode rather than defensive “This Yelling Is Too Loud” mode.  Giving space for hugs and calming before jumping into the work of talking through what is happening has allowed me to hear my son better and offer tools rather than just recrimination.

No, it’s not always as simple as that, but many times it is.  I’m not sure why it’s taken me this long to get to the point of using this as a default, but somehow Mary’s words spoke to me, and I wanted to share them with you in case you too need another way to deal with anger that helps you and your child calm down and reconnect.

What do you think?  Have you tried hugs for dealing with anger, or do you think you’ll give it a try?